Or read it HERE

The nature of the debate limited the number of MSPs that could speak and the time each had: we know many more MSPs were keen to join the debate than were able to on the day.

There was a clear cross-party consensus, with almost all speakers endorsing the positive engagement of civic society which has underpinned successes Scottish Government’s approach to international development since 2015. MSPs from the SNP, the Scottish Conservatives, Scottish Liberal Democrats and Scottish Labour all shared their support for the longstanding friendship between Scotland and Malawi, and specifically the innovative, distinctive and effective way the government, parliament and civic society work together in this relationship. There was also a strong call for meaningful, transparent consultation of civic society, in our partner countries and in Scotland, as part of the review.

It is genuinely inspiring to see the strength of all-party support for the Scotland’s approach to international development. Scotland can rightly take significant pride in the fact that its elected officials, of all stripes, understand, support and engage the civic links which unite our two countries, underpinned by the longstanding spirit of friendship, solidarity and mutual respect. This approach is perhaps more relevant and important now than ever before.

In opening the debate, Minister Jenny Gilruth MSP quoted the Malawi-Scotland Black Lives Matter Statement, and the recent Scotsman article by Susan Dalgety exploring these themes. The Minister outlined the principles underpinning the review and expressed her desire to listen to the views of civic society in Malawi and Scotland.

“…we can maximise the benefits of our international development efforts only if we work together, both within and outside the chamber. That means working across party lines and with our partners across civil society, including community groups, businesses, schools, academia, the health sector, religious organisations and many more. We have all those in abundance in Scotland, and we should ensure that we continue to support them.”

“There are strong links between Scottish civic society and civic society in our partner countries. That is an important approach that should be retained, because we can benefit from the knowledge and expertise there. There are good examples of partnership working and capacity building that should not be lost.

“The key principles that underpin the review are not contentious, but are broadly supported across and beyond the sector. However, questions remain about the practical implications of how the principles are to be achieved, and who is being consulted and involved in determining that. I have spoken already about the importance of meaningful and transparent consultation that encompasses organisations that are already active in partnership work, as well as new voices in Scotland and our partner countries.”

“…that cross-party support draws its strength from the extent of civic buy-in from across Scotland. Like Alexander Stewart, I am a co-convener of the cross-party group on Malawi and, as such, I will shamelessly and proudly use the warm heart of Africa to illustrate my point. There is scarcely a community in Scotland that does not have some sort of link with Malawi, through individuals, schools, churches, community groups, businesses and others.”

“I will finish by highlighting the co-ordination effort that President Chakwera referred to. The Scotland Malawi Partnership and its sister organisation in Malawi do tremendous work in identifying connections, making links and then facilitating and supporting relationships. That co-ordination is invaluable. It allows members to feel part of something bigger, more substantial and even more rewarding. It also allows Scotland to punch above its weight by levering in £200 for every pound spent.”

“Scotland’s international aid policy relies on the core value of partner-led and mutually beneficial partnerships. It is where such partnerships exist that international development works best. We have seen that in practice through the fantastic work of the Scotland Malawi Partnership, which other speakers have mentioned. Its approach has long left behind the unhelpful and, frankly, outdated mindset that viewed international development funding as an unequal balance of power involving donors and somehow lesser recipients.”

“It is those partnerships, which are fostered through locally rooted, civic communities, that must be safeguarded and protected in the Government review. Previous consultations involving all stakeholders at both national and local level have proved to be invaluable in informing a joined-up approach. I therefore hope that the review will, in practice, carefully strive to include all civic groups in the conversation and be as transparent as possible. If that was not the case, a true disservice would be done to the collaborative working relationships that have been successfully forged over time.”

“As the minister will know, the existing strategy has commanded cross-party support under successive ministers in successive Governments. I would encourage ministers, before contemplating any reduction in small grants, core funding of NGOs or development education, to reflect on the origins and purpose of Scotland’s international development strategy in considering how to adapt it to the era of Covid-19.

“As the minister said, the origins of both the international development fund and the formal partnership between Scotland’s devolved Government and the Government of Malawi go back to 2005. They were conceived not as competing with or replacing the much higher levels of development assistance that the Department for International Development provided on behalf of the whole of the UK, but as adding value on the basis of Scotland’s established strengths. The most important of those strengths has been not the work of Government then or since, or the work of any party in any Parliament, but the network of mutually supportive connections between civil society in Scotland and civil society in developing countries, starting with Malawi.

“Thousands of Scottish people, in hundreds of communities, churches and NGOs, have worked in partnership with counterparts in developing countries—not only the partner countries that have been mentioned, but other countries, too—for years. They did that long before devolution and have continued to do it, working together in a wide variety of ways.

“Scottish civil society has matched support for development projects in the global south with support for development education at home, promoting global citizenship among not just countries and institutions, but individuals and communities. Many of those civil society individuals and organisations are members of this Parliament’s cross-party group on international development, which I convene, and other cross-party groups that members have mentioned. Many of them would be deeply concerned about any shift away from Scottish Government support delivered to partner countries through Scottish NGOs. That support helps those organisations and individuals to work in the world’s poorest countries, and develop projects that go directly to those who need them most.”

“Nobody who has been to Malawi can have missed the continuing affection for Scotland that exists there, notwithstanding Scotland’s far from blameless role in the British empire, which the minister rightly pointed out. That affection is evidenced in many ways, not least in the fact that, when an independent Malawi quite rightly decolonised its place names, it left one European name, Blantyre, on its map out of the regard that it had for David Livingstone.

“Statistics suggest that an amazing 45 per cent of Scots may personally know someone who is directly involved in Scotland’s work in or for Malawi, often through partner agencies such as SCIAF or Mary’s Meals. Those people have transformed the lives of hundreds of thousands of children by ensuring that they have the cup of porridge in school each day that often makes the difference between their being able to attend school or not.

“I want to make a particular case for the work that the Scotland Malawi Partnership and the Malawi Scotland Partnership, which is its sister body in Malawi, continue to do in promoting a dignified two-way partnership. As others have pointed out, such a partnership does not simply mean one-way charity, with benevolent donors on one side and grateful recipients on the other; it means recognising that Malawians have a great deal to teach Scotland.

“The partnership has been outspoken, passionate and provocative, and it has challenged both Government and the international development sector when required for the past 15 years. We must cherish that model. I hope that we will see it flourish in the future with continuing Scottish Government support as we seek to build further on those already very strong foundations.

“The relationship between Malawi and Scotland was emphasised only last weekend when the President of Malawi, Lazarus Chakwera, addressed the annual general meeting of the Scotland Malawi Partnership. I hope and believe that we will continue to place that relationship at the front and centre of the work that Scotland does in the world.”

“As many members have already acknowledged, the partnership between Scotland and Malawi is unique and worthy of particular praise. The success of that partnership is rooted in historic and civic connections between the two countries, making progress more enriching and empowering for both. That can be typified by a simple statistic that has already been mentioned by Liam McArthur: for every pound that is invested by the Scottish Government, an additional £200 comes from Scotland’s civic society. That adds up to £49 million in support from individuals and local communities across Scotland.”

“Engaging with communities and civil society in the focus countries and in Scotland must therefore be part of our approach to international development. That is why Labour’s amendment makes it clear that there should be meaningful consultation with all stakeholders.”

“I am also keen to balance the views of the sector in Scotland with those of our partner countries, as I mentioned in my response to Lewis Macdonald. I will work with members on that and it is my intention to return to the chamber, given the opportunity, following the review’s conclusion to allow us once again to reach consensus on how we can move forward.” 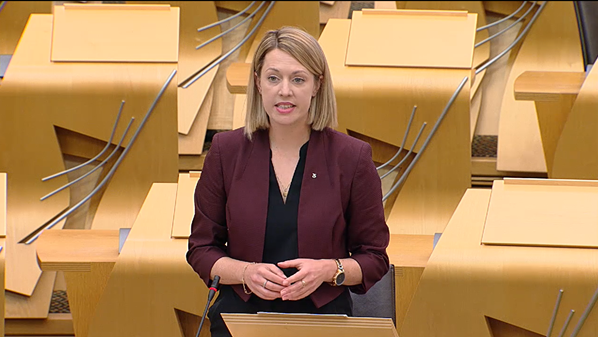