The SMP is delighted to help launch an excellent a new book, and an exciting addition to anyone's Malawi library. Politics, Christianity and Society in Malawi: Essays in Honour of John McCracken is edited by former SMP Chair, Kenneth R. Ross, and Wapulumuka O. Mulwafu, and is published by Mzuni Press.

The SMP is delighted to help launch an excellent a new book, and an exciting addition to anyone's Malawi library. Politics, Christianity and Society in Malawi: Essays in Honour of John McCracken is edited by former SMP Chair, Kenneth R. Ross, and Wapulumuka O. Mulwafu, and is published by Mzuni Press.

With the death of Professor John McCracken in 2017, Malawi lost a pre-eminent historian and the Scotland Malawi Partnership one of its most informed, insightful and incisive members. This book celebrates McCracken’s contribution to the study of Malawi’s history and seeks to build on his legacy. Part of his genius was that he identified themes that hold the key to understanding the history of Malawi in its broader perspective. The authors contributing to this volume address these themes, assessing the progress of historiography and setting an agenda for the further advance of historical studies. The book is a valuable resource for students, researchers and all who are interested in gaining a deeper understanding of Malawi’s past and present.


The SMP had a hand in the evolution of the book since it co-sponsored a major Malawi Studies Conference hosted by Edinburgh University in 2018, which celebrated the contributions of John McCracken and Jack Thompson, both distinguished historians of Malawi and leading SMP members who sadly died within a few months of each other in 2017. Some of the papers presented at the conference have been further developed for inclusion in the book. A Call for Papers allowed further contributions to come from Malawian scholars who were not able to attend the Edinburgh Conference but who were motivated to pay tribute to John McCracken.

Kenneth R. Ross, former SMP Chair and one of the editors of the volume, commented: “We applied full academic rigour to the preparation of this volume but at the same time we were always deeply aware of the emotional dimension as scholars acknowledged their debts, both academic and personal, to someone who was a mentor and inspiration across the six decades of his involvement with Malawi. The result, we feel, is rather a special book that breaks new ground in research while also expressing the distinctive affection and collegiality that Malawi seems to evoke. We hope it will appeal not only to professional historians but also to many others who have Malawi at heart.”

The book can be ordered in the UK (as print or e-book) from the African Books Collective –www.africanbookscollective.com; or in Malawi from Mzuni Press – mzunipress1(at)gmail.com


“This important volume reminds us of John McCracken’s major contribution to, and influence on, Malawian historiography since the 1970s. The editors must be commended for ensuring that the authors of the essays are both locally and internationally based but equally significant is their inclusion of the latest generation of Malawian scholars, which would have pleased John immensely. In addition, their impressive work gives direction to guide and inspire future scholarship in Malawi.”
Dr Owen J. Kalinga, Professor of History, North Carolina State University, USA


"This collection is a fitting tribute to John McCracken. Its contributions reflect and expand on his scholarly legacy in the economic, social and political histories of Malawi while reflecting his deep commitment to and affection for the land and its people. McCracken would have been much moved in heart and mind by this project."
Dr Joey Power, Professor of History, Ryerson University, Toronto, Canada 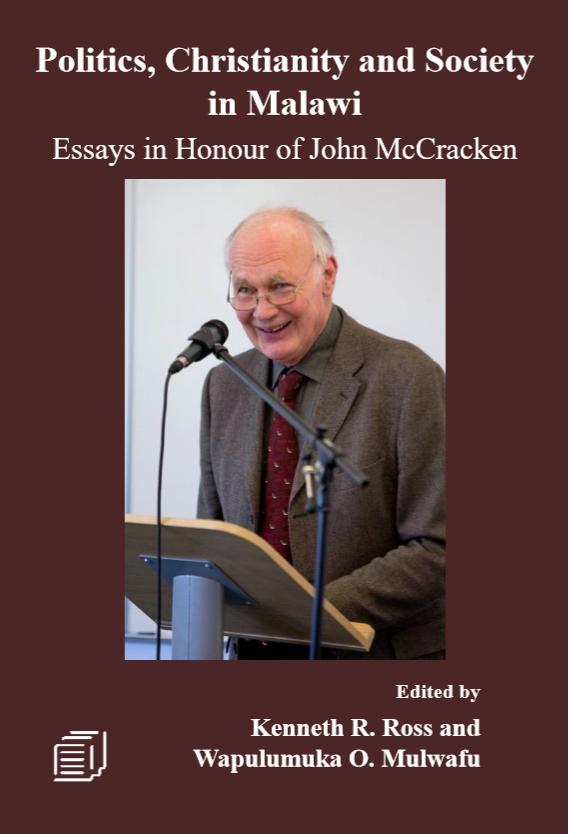 Previous
How The SMP is Responding

Next
Video diary by Willan Kalinda