Friendships between Scotland and Malawi celebrated at Christmas Tree Festival

A Christmas tree has been transformed in celebration of a 25-year partnership between Scotland and Malawi and its impact on improving girls’ access to secondary school education.

Included among the 40 trees at the ninth ‘New Life’ Christmas Tree Festival in Edinburgh, The Mamie Martin Fund tree will feature stories of some of the girls who have been helped by the Scottish charity to access education in Malawi, and show the positive impact this has had on their lives.

Moira Dunworth, who is one of the founding trustees of the charity, says the festival is the perfect chance for the Mamie Martin Fund to say thank you to those who have supported them over the past 25 years.

“There’s one woman called Elvas Benadeta Singini,” Moira said. “When her parents died, she was brought to the school and given a place there and support from the Mamie Martin Fund. She had nobody in the world.

“She left school and got a job with 500 Miles which is a Scottish charity and they supported her through her degree and now two professional qualifications.

“Elvas is now probably their most senior staff member and held in high regard and she is there because Mamie Martin Fund supported her.”

Celebrating their 25th anniversary in 2018, the roots of the charity actually go back further to the inspirational vision of a young woman called Mamie in the 1920s.

While in Malawi with her husband Jack, a Church of Scotland missionary, Mamie became aware of the need for girls to have access to education and made it her mission to use her experience as a teacher to set up classes.

Mamie tragically died in 1928 giving birth to her second child, meaning her first daughter Margaret returned back to Scotland at just 15 months old.

Six decades later, Margaret returned to Malawi and became inspired to set up a charity and build upon the legacy of her mother’s work after hearing about the impact of her work.

This year alone, the charity has supported 112 girls in Northern Malawi to attend school and is focused on expanding their support in 2019.

Eileen Sinclair, the wife of Mamie’s grandson, Willie Sinclair, said: "Christmas is a time for remembering friends and making connections, so we are delighted to be able to share our memories and our work through this tree and in this festival.”

As well as featuring the stories of girls whose lives have been changed through access to education, the Christmas tree will also have decorations made from the recently launched Scotland-Malawi chitenje cloth, a material that is a very important part of Malawian culture.

The chitenje was created in 2018 to celebrate the people-to-people principles existing between Scotland and Malawi, an ethos shared between the Scotland Malawi Partnership and their sister network, the Malawi Scotland Partnership.

The Scotland Malawi Partnership is the national civil society network coordinating, supporting and representing the people-to-people links between Scotland and Malawi. It is one of the largest cross-community international development networks in the UK and represents a community of 109,000 people in Scotland with active links to Malawi.

It coordinates, represents and supports over 1,200 links with Malawi, including half Scotland's local authorities, every Scottish university and most of its colleges, 250 primary and secondary schools, dozens of different churches and faith-based groups, hospitals, businesses, charities and NGOs, and a wide range of grassroot community-based organisations.

The work of the SMP isn't just about 'international development', with donors on one side and recipients on the other. It's about partnership, about joint working, and about friendship.

While attending the Malawi Scotland Conference in Lilongwe Malawi in September this year, Moira was charmed by the new chitenje and set about buying material to have her own dress made.

“I thought it was lovely how it combined the [Scotland and Malawi] flags, and the whole partnership was celebrated in this cloth,” Moira said.

“When I went to collect the dress, I asked if I could have all the bits that were left. He, the tailor, assumed I meant that the large bits which he had saved for me which was great but I actually also meant the off-cuts, all the bits lying on the floor, which included bits which had the flags on them.

“As soon as I saw the flags, I thought ‘Christmas tree decorations’ and I’m just surprised that other people didn’t.”

As well as taking part in the festival, the Mamie Martin Fund is also running a Christmas gift card campaign on their 25th anniversary, with the money raised going towards their continued focus on education.

“Never underestimate what a little bit of money can buy in Malawi,” Moira said. “We now have gift cards where for example you can buy a school uniform for a girl for £16 or pens and notebooks for ten children for £5. You can buy someone a gift that will benefit someone in Malawi. 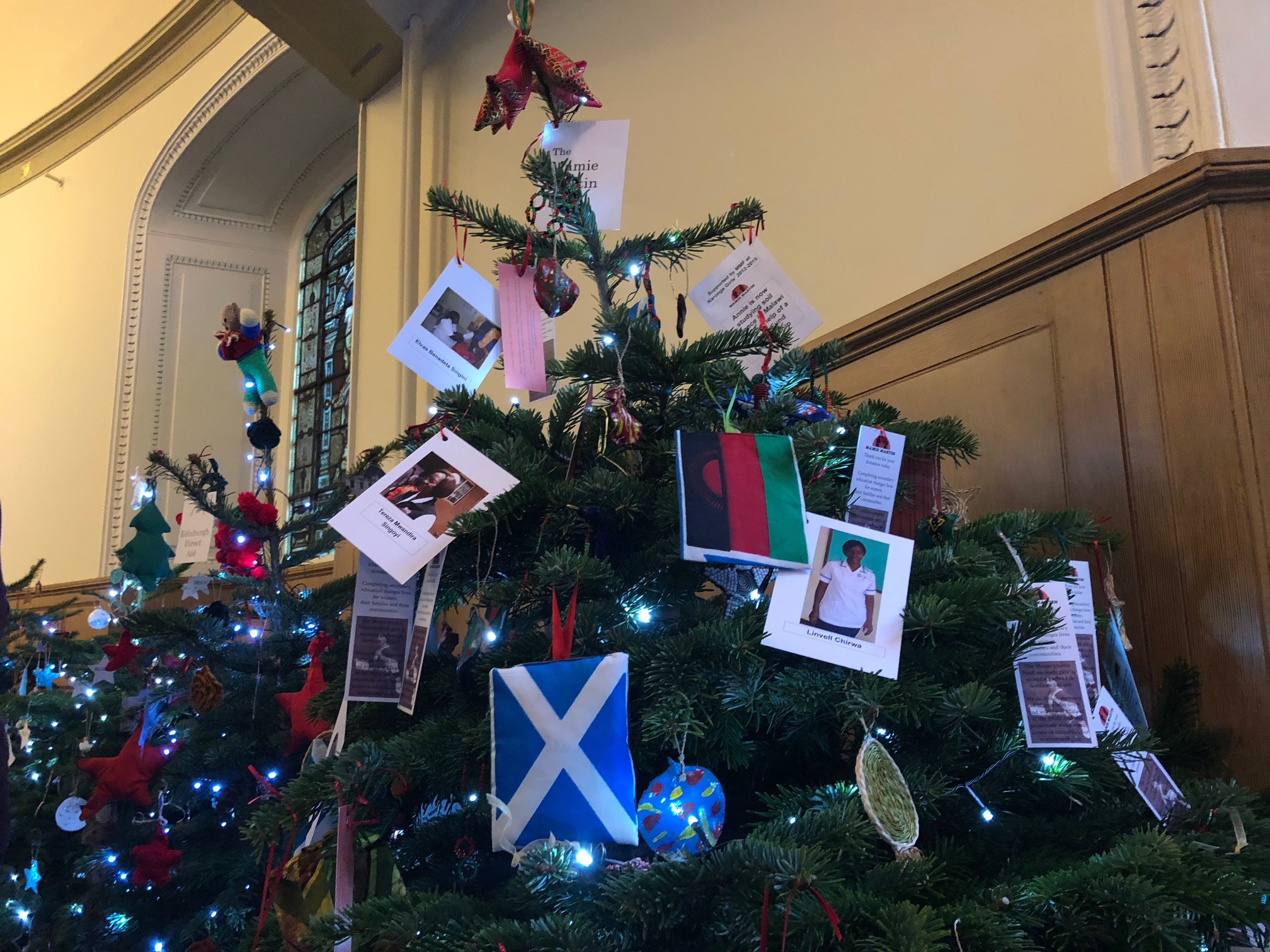 Previous
Have your say on #BuyMalawian 2019