SMP AGM, with the President of Malawi, Deputy First Minister of Scotland and Samson Kambalu 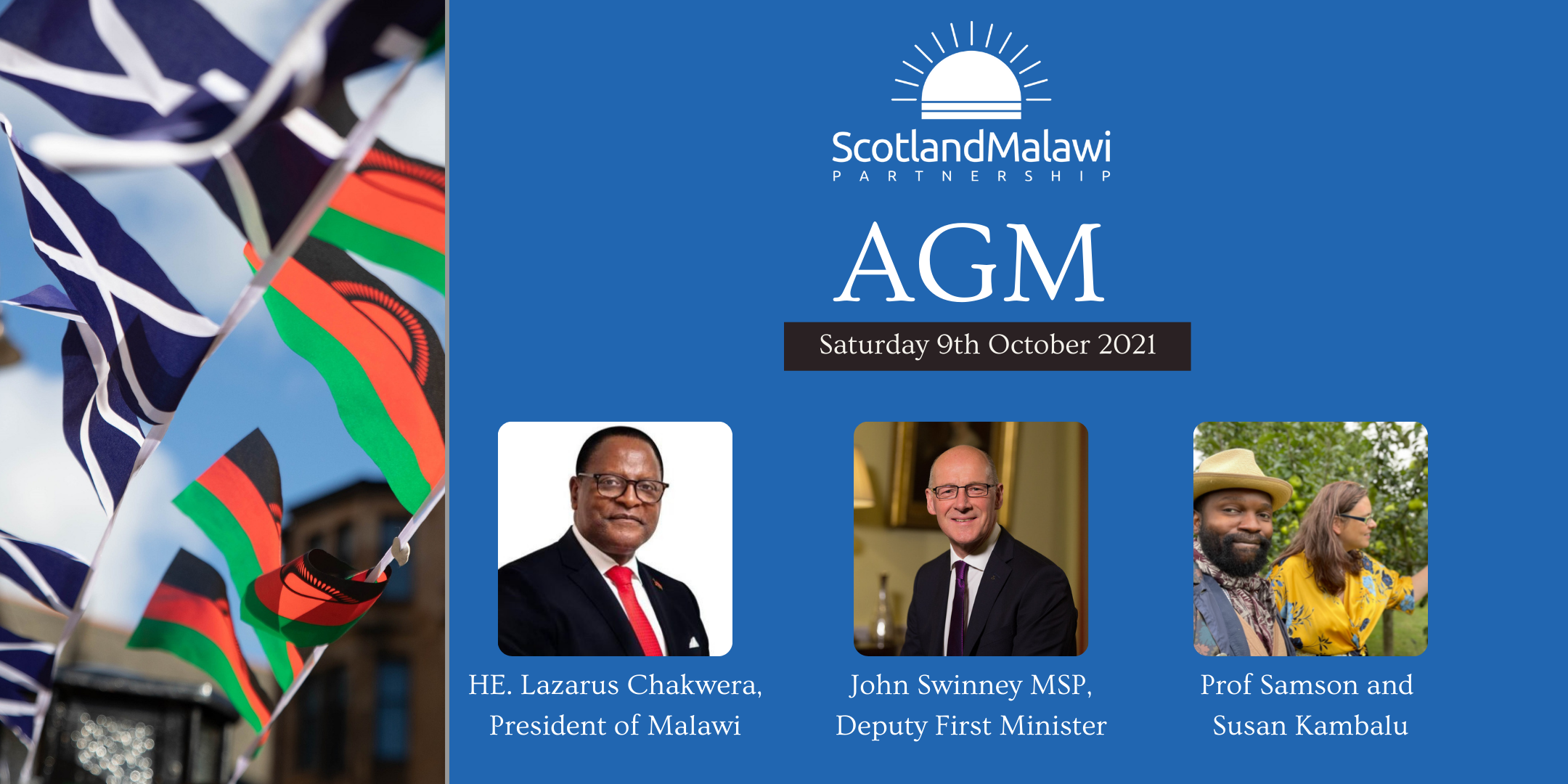 We were delighted to have three amazing keynote addresses as part of the meeting: 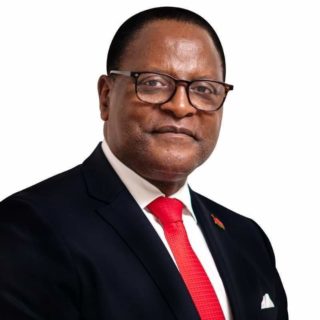 His Excellency Lazarus Chakwera the President of the Republic of Malawi

President Lazarus Chakwera serves as the ex officio Honorary Co-Patron of the Scotland Malawi Partnership, alongside HRH The Princess Royal. Last year he gave an inspiring pre-recorded speech for our AGM, in which he set Scotland three challenges for the bilateral relationship. At this year’s AGM we updated the President on progress against these challenges and the President then gave a live address followed by a Q&A with members.

In his speech, the President celebrated the unique people-to-people links between Scotland and Malawi, and thanked the Scottish Government for its continuing and longstanding support of these wider civic links which are the lifeblood of the bilateral relationship, through the SMP and MaSP.

Scroll to the bottom of this page for quote graphics from this speech, which we encourage members to share on social media. 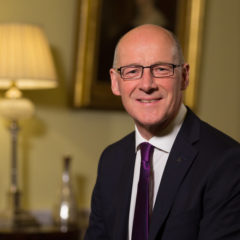 The First Minister of Scotland, Nicola Sturgeon MSP, had been planning to address the AGM but unforeseen last minute scheduling issues meant this was not possible. Instead, the Deputy First Minister spoke for the Scottish Government.

“In the 17 years since it was established, the Scotland Malawi Partnership has played a vital role strengthening the ties between our two nations. So I want to start by thanking everyone, the individuals, the community groups and charities who have helped to make our partnership such an outstanding success.”

“One of the things which I find most impressive when I reflect on the last year is that a time when Malawi and Scotland’s relationship could have grown more distant, it has actually grown stronger.”

Scroll to the bottom of this page for quote graphics from this speech, which we encourage members to share on social media.

Prof Samson Kambalu is the Associate Professor of Fine Art at Ruskin School of Art and Fellow by Special Election at Magdalen College of the University of Oxford. He became perhaps Malawi’s most famous artist earlier this year when he won the Mayor of London’s prestigious fourth plinth Trafalgar Square commission by public vote. His larger-than-life statue of Malawi freedom fighter John Chilembwe, titled ‘antelope’, will adorn the fourth plinth for two years from 2022; literally sizing up to the many projections of imperial and colonial power in central London.

Speaking in Black History Month, Prof Kambalu talked about his work and the key role of John Chilembwe. Samson spoke alongside his Scottish wife Susan, as they celebrated 20 years of their own “Scotland-Malawi partnership” (they were married by SMP Member Bobby Anderson)!

In the Q&A we explored continuing issues those from Malawi face as they live in the UK and the prejudice Samson faced as he went through securing UK citizenship.

‘Getting ‘Antelope’ to Trafalgar square was not easy, there were so many obstacles; we did this together over twenty years. The UK Government does so much to put you off. When I applied for a British passport I was asked ‘are you marrying Susan just to get a British passport’? I found that very strange because in Malawi we are a very welcoming people.’ 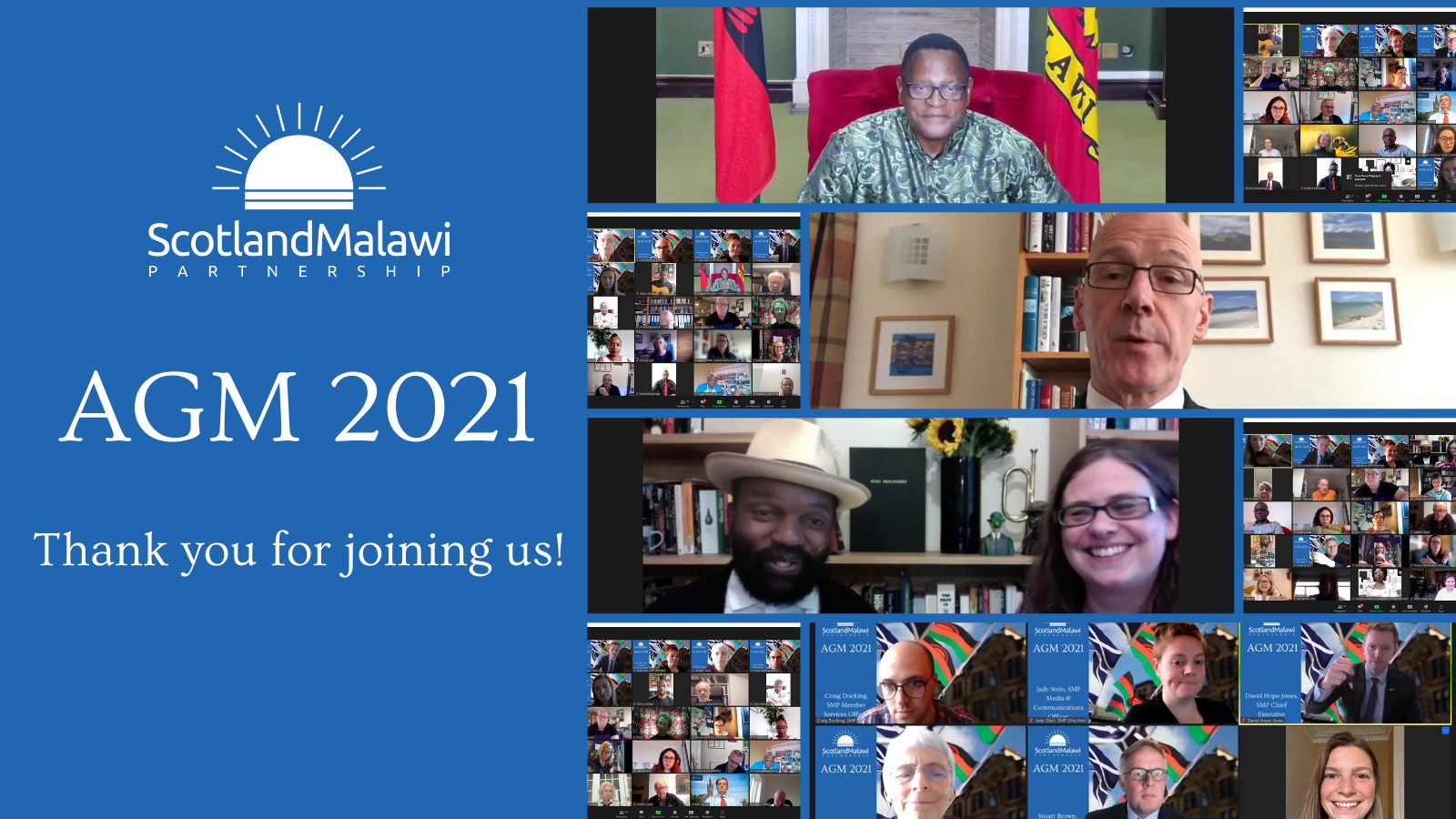 The meeting included 12 thematically and geographically grouped networking breakout groups, with everyone attending invited to share a little about their own Scotland-Malawi link. New connections and fresh collaborations were established through these groups.

In addition to all the brilliant networking, inspiring speeches, energised discussions and brilliant music, we also undertook the core business of the AGM.

Our 2020 AGM Minutes were approved, our 2020-21 accounts were passed and the independent examiner approved, all unanimously.

In keeping with our constitution, six trustees stood down from the Board: Charlie Bevan, Moira Dunworth, Gillian McMahon, Denis Robson, Heather Cubie and Fiona Anderson.

All those attending were able to move between 12 discussion groups, framed around the below key contemporary questions:

We were delighted to have three surprise musical performances during the afternoon to entertain and energise members. David Luhanga and Brave Mnyayi performed their own fantastic Malawian songs and, following a request from Malawi, Luisa Brown quickly picked up her fiddle and we all joined hands (digitally!) and ended the afternoon with a traditional ‘Auld Lang Syne’.

His Excellency Lazarus Chakwera the President of the Republic of Malawi, SMP AGM 2021

Watch the AGM in full here 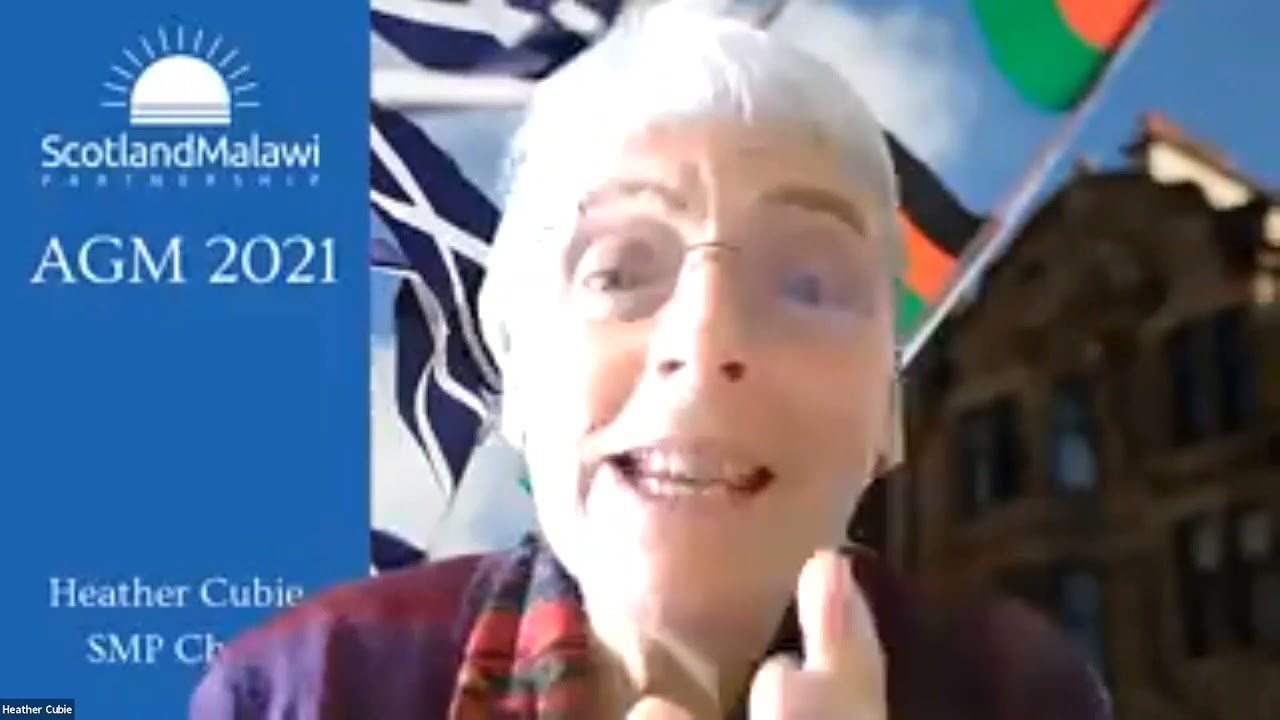